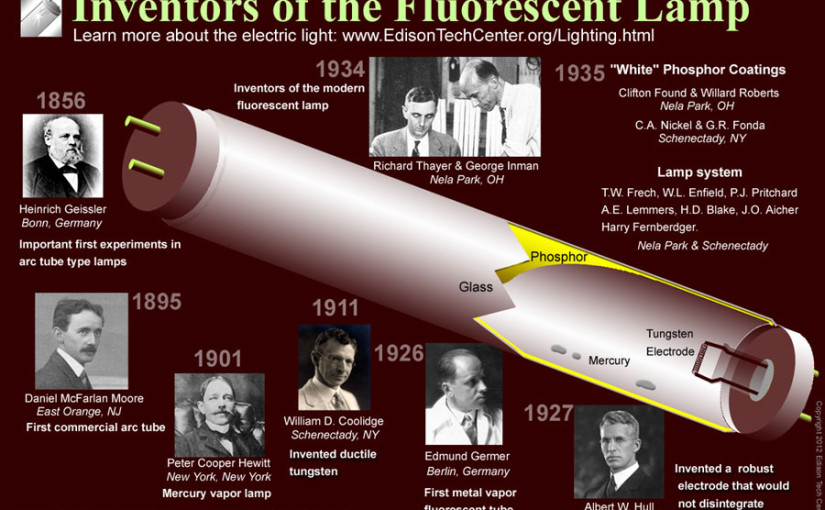 The question of who invented the fluorescent lamp came up during research for the Edison Tech Center’s three year program to cover the electric light and its history. As we worked on the program it became clear that a lot of junk information had been circulated on the internet. This poorly researched information exists for a few reasons.

The internet has reinforced myths surrounding many technologies due to poorly researched magazine articles. Authors of online content are required to create material on a ever-shortening deadline and so many use dubious online sources of information and do not use printed material or interviews/contact with actual experts in the field. Online popular sources such as Wired Magazine and About.com (owned by the New York Times) have continued to put out massive quantities of poor quality articles which do nothing more than recycle information from wikipedia into their profit-making operation. While the NYT maintains high standards for articles published under the brand, there is a rather low bar for quality for its other brand: About.com.

“Content Farms” have been especially destructive to historical accuracy as the articles are often created within a one hour period, then the content is promoted on search engines using abusive tactics and tricks. Google’s recent Panda Update helped combat “junk” sites but there are still plenty of bad articles out there.

Nationalism and the Flores and Tesla Myths

I’ve personally witnessed nationalism distort technological history in print and online on three continents, so it’s no doubt that big and small countries alike have abused their position and play fast and loose with facts.

Serbian nationalism and Tesla: Nikola Tesla spent most of his live in the fruitful environment of NYC of the 1880s onward. His large ego and showmanship led him to make many dubious claims about being “first” all his life. Most of these claims are quickly dispelled while others like his claim on the first induction motor will continue to subject of debate. Creators of content in Serbia like to use weak claims as a basis for their statements, including that he “invented” the fluorescent light. Well he didn’t and its well documented.

Another popular internet myth is that Agapito Flores invented the fluorescent lamp. This is incorrect as well, it is proven by dates of development and documents. Flores was an innovator, and that fact alone is awesome, Filipinos should feel proud of this engineer as he is a good example for their youth. It would be nice if Filipino authors would stop being sloppy with the facts and start highlighting Flores for other interesting and cool things he worked on.

Respect for the real developers is important. Philips, OSRAM, Westinghouse, Sylvania, General Electric, Siemens, and other companies had spend large amounts of their research budget on legal fees and accurate scientific documentation. The reason for this incredible amount of documentation is that the company may have to prove in court exactly: to the day, that a breakthrough was made by one of their engineers. If you start reading about the history of electric technology and history of patents the 1880s and 1890s were a legal battleground. You will find a zoo of individuals and companies all suing the heck out of each other with claims. It was a gamble which bankrupted many, and made others very rich.

After the explosive growth of the electrical age the legal situation was tangled mess of battles. Sometimes these battles turned violent and personal. A great lamp pioneer of neon and fluorescent lamps Daniel McFarlan Moore was shot to death at his home by a former employee who found out that Moore had beat him to an invention. GE patent lawyer George Blodgett (father of women engineer and pioneer Catherine Blodgett) was shot under mysterious circumstances. Tesla used his prominent position among the elite of New York City to attack J.J. Thomson, Edison, Moore, Marconi and many others in court.

The world of invention is not without this dark side. Jealousy raged along with long drawn out court battles. Poor documentation of lab work in the 1880s-1900 period allowed such a quagmire of court cases.

By the time the GE Research Lab really got off the ground in the 1910s GE had learned its lesson and required engineers and scientists to document everything they worked on each day. Therefore when we say Edmund Germer, George Inman and Richard Thayer invented the fluorescent lamp as we know it, that information is absolutely solid. But of course don’t forget they were standing on the foundation of work developed by many others for decades before then.

As you can see from our list of inventors we attempt to clarify the real inventors of the fluorescent lamp, we indicate which part of the lamp they made developments on.

The opinions expressed above are the viewpoint of the article’s author and not the official position of the Edison Tech Center.