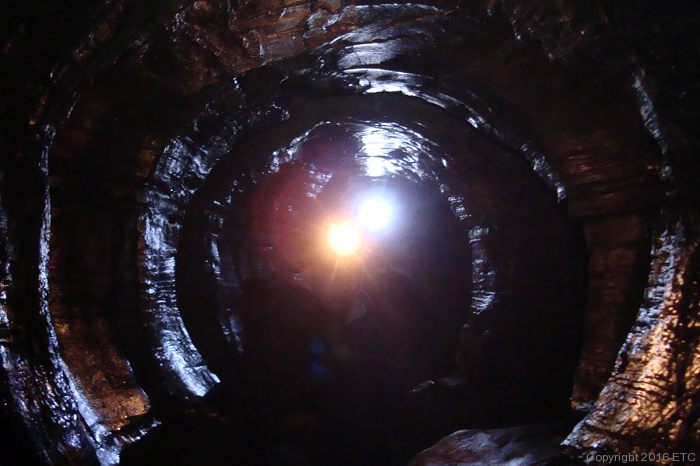 In early times—even pre-historic—hand-carried torches were commonly carried by cave explorers. At Mammoth Cave, Kentucky, reeds that grew along the Green River and tributary streams were dried and then set afire to provide light for paleo-Indians who explored sometimes miles into the cave in search of crystals and salts 4000 years ago. Though modern studies have proven they provided surprisingly bright light, for trips deep into the cave large quantities were required along with flints to set them aflame. Stubs of these torches have been found by the thousands in certain stretches of Mammoth -–such as the section known as Salts Cave—indicating long excursions into the cave over extended periods of time.

In more recent times—from perhaps the mid-to-late 19th century, oil lamps and kerosene lamps were used. Although they provided good light and were widely used in trips through commercial caves such as Mammoth and Howe Caverns in New York State, they had a number of negatives. For one thing, they produced smoke and unpleasant fumes; given the fact that air circulation through many caves is very slow, this meant the buildup of smoke and consequent deposition on the walls and formations, causing them to blacken—a phenomenon that also occurred in caves such as Mammoth in ancient times where the dried reeds were used as light sources. Hand-held lamps also caused obviously problems when a steep incline or a climb was involved, and when cavers were crawling through especially tight places the buildup of smoke and fumes would have been extremely unpleasant if not toxic. The well-known cave explorer Floyd Collins often spent days exploring alone in a section of Mammoth known as the Crystal Cave section—sometimes traveling miles from the entrance—and he lighted his way using hand-held kerosene lanterns, even though his routes often involved long, very tight crawlways. (His subsequent death in another cavern known as Sand Cave was due to his being trapped in a rockfall and was not caused by a failure of his light source.)

With the advent of organized caving under the auspices of the National Speleological Society in 1941, cavers began looking for less cumbersome, more efficient sources of light, and soon began widely using miners’ brass carbide lamps which could be affixed to a protective helmet. The best known of these were manufactured by the Justrite Company. Having them on a helmet freed the hands, making them especially efficient on climbs and extended crawls. They relied on calcium carbide for fuel which releases acetylene gas when moistened with water. The acetylene is lighted with a flint affixed to a reflector and produces an intense, white flame. A small amount of carbide could produce light for an hour or two depending on the length of the flame, and extra carbide could be carried in waterproof containers, allowing extensive cave trips; in most caves, the presence of water is a given. A downside of the lamp was that the spent carbide produced a smelly white powder which had to be carried out of the cave to avoid defacing or polluting the cave passages and carefully discarded afterwards. The burning acetylene produced an often pungent odor sometimes compared to the smell of garlic. But a definite positive aspect of the lamps was the heat they produced—one could warm one’s hands during a long trip in a cold cave. 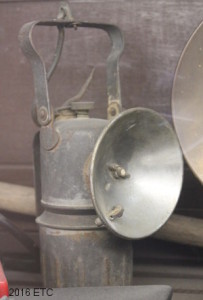 In addition, the careful placement of a lighted carbide lamp under one’s stretched-out shirt could send a warm flow of air over one’s chest, doing a good job of warming the body’s core. This procedure is known as a “Palmer Furnace,” after Dr. Art Palmer, a well-known cave explorer and speleologist. In the 1960s the lamps were commonly sold new for $3.95, but after a time, the cost of brass began to skyrocket and the price of the lamps shot up accordingly. For a time, Justrite began manufacturing carbide lamps made largely from plastic—but these proved to be much less efficient than the brass versions and had the nasty tendency to begin to melt when held in other than upright positions, making them highly unsuitable for caving, which often requires a human body to be contorted into highly awkward positions.

Starting in the 1970s electric headlamps also manufactured by Justrite became popular. These had none of the disadvantages of the carbide lamps and produced a relatively bright light that could be focused and used AA or D batteries carried in a small side pack and connected to the lamp by a cable. A number of replacement batteries as well as replacement bulbs could easily be carried in a caver’s backpack but the lamps lacked the romance of the carbide lamps. 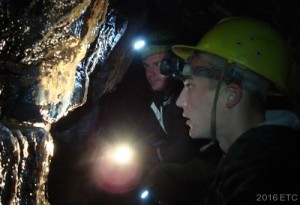 In the 1980s, a powerful headlamp known as a “wheat lamp” (“Wheat” being the name of the company that produced them) began to become popular among cavers. The wheat lamp like the carbide lamp had been widely used by miners, and lacking a flame which could ignite flammable gases in mines were a great deal safer. They gave a very bright light which could also be focused and operated on a rechargeable battery—on a single charge, they could produce about 8 hours of strong light. The downsides included the fact that the battery pack—carried on a belt around the waist—weighed around 5 pounds, making it very cumbersome for long crawls and difficult climbs. Another down side was the price: lamp and charger sold for around $250.

The advent of LED technology has brought a revolution to cavers’ headlamps. LED headlamps are lightweight, they use AAA batteries, a great many of which can easily be carried in a caver’s pack, they last for many hours, and they are relatively inexpensive. Walmart carries a $20 LED headlamp (with strap) that has several settings and gives an intense blue-white light. Because of their light weights, two or three of the lamps can be carried as back-up light sources, making it very unlikely that a modern caver will ever be left stranded in the dark.

About the author: Mike Nardacci has been caving around the US for decades and is based in the Upstate New York region. He has inspired thousands of young people to appreciate and engage in the rewarding hobby of caving through his work as an instructor at the Helderberg Workshop in Altamont.